Eve was perfectly proportioned. No, this isn’t the start of some weird biblical fan fiction.

Eve was our little Sheltie, and she truly was a perfectly proportioned miniature collie-like dog. She was small but proud, and in many ways the queen of our household. Eve passed away this past week of congestive heart failure.

As a guy who in the past had favored larger, “manlier” dogs (whatever that means), I was a bit indifferent at first when we got Eve over 12 years ago.  She was on the small side-even for a small breed- and quite honestly was a sickly, sad, weak little thing when we picked her up that day. Her hair was matted and patchy, and she had eyes that seemed both happy and sad at the same time.

As we got her home, and over time got her healthier, she grew in confidence and self-importance, if not in size. For example, it was interesting to see her herding instincts, even as a very young pup- she would frantically circle the yard, trying to keep Amanda and Jonathan inside her imaginary paddock. She was very fast, with tremendous bursts of speed, but since she wasn’t very strong, as she rushed to run in progressively tighter circles around the kids, she would stumble and flip over as her own body weight and momentum sent her flying off of her feet, tumbling across the yard.

Afterwards, she would scramble back to her unfinished duties, and go right back to herding the family again, oblivious to our chuckles. This was all serious business to her, and it was very important. Eve had many great years with our family- as part of the family- traveling with us, going to every outdoor activity we could take her to.  We have secretly slipped her into hotel rooms, watched fireworks displays, and taken her on numerous beach walks and arts festival strolls. She seemed to enjoy the attention that she always received, and she got an extra spring in her step on such occasions.  She was never much trouble, relatively quiet and obedient, and when not “working”, she was certainly a playful companion. However, she was always a runt, even if she didn’t know it.

As the children grew older (but not the parents since that doesn’t happen) we all fell more in love with this little ball of fluff, and whenever we would see a small, weak, tiny, cute, helpless little animal of any kind, we simply would say “Eve!” in unison. Eve’s name would come up in random conversations and in the odd situations. In no particular order, I recall one of us (usually me or Jon, never Linda) blurting out an “Eve!” in the following places:

Just to establish that there were limits to this silliness, I don’t recall ever shouting “Eve!” at a funeral or a wedding.

While small in stature, and serious in her herding “business”, Eve was also very loving, loyal, and affectionate. She loved to sit on our laps, nap next to any of us, anywhere, and we never even considered putting a fence around our yard since she was always so anxious to come in from outside to be with her family (and our food). One of our favorite Eve tricks was to see how high she would leap into the air to grab a treat. Her excitement and energy on these occasions were off the charts- we called her the “Leaping Loon”- her vertical leap was truly impressive.

As Amanda and Jonathan went off to college, Eve remained the constant in our household. Conversations were held with Eve as the stand-in for any other member of the family. But over time, the rate at which her claws clicked on hardwood floors was noticeably slower.  Her leaps were less frequent and not all that impressive anymore. The past few years Eve had slowed considerably. Her hearing was very bad, her eyes clouded her vision, and her energy level had dropped.  Over time, it was difficult to watch as she took on symptoms and conditions in an accelerated version of what we humans are all likely to experience in our later years.

I’ve been guilty of saying (or thinking) that “It’s just an animal” when I hear about other people mourning the loss of a family pet. But on that night when her little heart started to fail, and she couldn’t catch her breath, and those sad, loving eyes looked up wondering what was so wrong- I understood.

Her weakness was evidently contagious.

Perhaps a little dog’s brief time on earth can help us in other ways. She was totally dependent, but so independent. Her affections were pure. She trusted without question. She wore her feelings on her little paw-tipped sleeves, as she expressed so much without ever speaking. Her eyes were happy and sad at the same time. 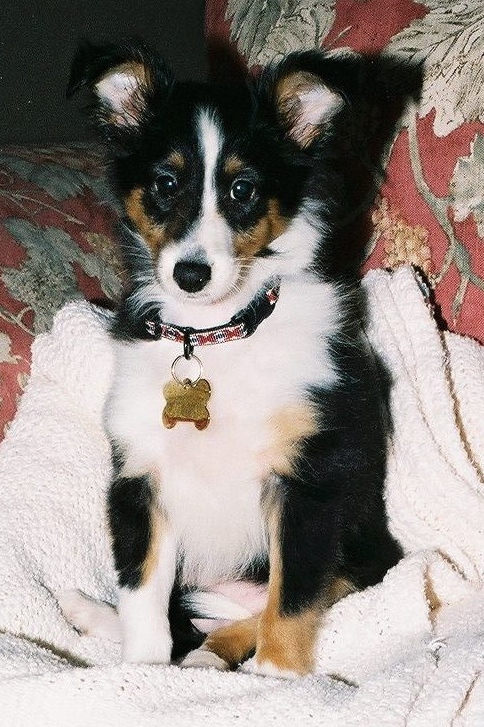