I was frustrated and frantic, trying to get my custom “Night of the Living Dead” pinball machine working at the start of the Rhode Island Mini-Maker Faire last October. It worked like a charm the day prior. No matter- after 3+ hours (with Amanda’s help) of hanging banners, setting up displays, and making dozens of complex electrical connections, when I pressed the big red “Start” button on the front of the machine- absolutely nothing happened.

My “Night of the Living Dead” Custom Design

“Expletive!” I thought, or maybe I even said it out loud.

The Faire had opened, people started to stream in, and my custom pinball creation defied me- the backglass hero with a gun casually resting on his shoulder smirked. I had created that guy’s smirk- but I hated that cartoonish zombie killer right now. If I couldn’t get this machine to work, then I had nothing to show, and had just wasted a huge amount of time.

I also started to resent the people as they came up to me and asked if they could play my machine- I’m sure I tried to sound polite as I gave them excuses:

“Hi! I’d love to show you the game, and yes you can play- I’m just not quite set up yet. Why don’t you stop back in a half hour or so?”

What I wanted to say:

“Hey! Why don’t all you people just leave me alone and let me think! Every time I have to talk to one of you I have to start over trying to figure out what’s wrong! I’m ADD and you are not helping!”

After 30 minutes or so of this, that’s when Bob showed up. To his credit, Bob sensed my mood and tried to get to me through Amanda. Amanda quietly interrupted my flailing on the inside of the machine to tell me that “This man wants to talk to you about a special pinball machine that he made.”

“Can you tell him to come back later?”

“He insists that you will want to talk to him.”

That’s when I first met Bob Kieronski. Bob asked if I had heard of the “Create Life” experiment (also known as the Miller/Urey experiment of 1953). I hadn’t. Create Life?-at first I thought he was a mad scientist- a modern day Dr. Frankenstein, perhaps. I then reasoned that he may somehow be referencing my zombie theme, and had a theory on reanimating the dead. I think I asked him if he knew anything about reanimating a dead pinball machine. 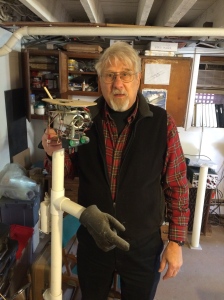 Bob with a robot like thing that chases you around…never mind.

He sensed that I was a bit distracted, so he did not linger for too long. He did pique my interest, however, when he told me that the only reason that he came to the Faire was to speak to me, since he had constructed a custom pinball machine designed around the theme of this “Create Life” experiment- complete with high voltage lightning jolts, and chemical reactions in real beakers and flasks in the backglass of the machine. He fumbled around with an iPad trying to show me some pictures and a link to his website, but it wasn’t working for him. At least the gremlins weren’t just picking on me.

Before he left, he again emphasized that- after I checked out the links myself- I would want to meet up with him later to discuss our mutual interests. He especially wanted to discuss why his flippers were so weak. That comment threw me a bit- since here’s a guy who is OK with the chemical composition of life itself, but he couldn’t figure out a simple electrical problem?

Soon after Bob left, I accidentally stumbled onto the solution to my dilemma as I randomly started (literally) manhandling all the old relays in the game cabinet. I moved each of them until one of them caused a spark of life- It seems that a cotter pin had come loose, and something was pressed against the “Game Over” relay- essentially putting the game into limbo between life and death so it could not restart. Ironic, huh?

I later Googled Bob, and learned about his career in Bell Laboratories, and later his adventures into a bizarre type of science-based art. His work ranged from colorful light refraction displays to a rubber-chicken based alarm clock. He had even displayed his pinball machine in an art gallery.

I’m not kidding about the rubber chicken alarm clock.

We kept in contact and arranged to meet for lunch at his mansion in the heart of Newport, RI. I call it a mansion only because it is- a huge designated historical site- albeit a rambling, subdivided structure with condominiums, scattered living quarters, and a prototypical laboratory in the basement. It was not your typical Newport mansion.

From the moment I arrived, Bob was very excited and pleased to share his work with someone who had (at least some) shared interests. He introduced me to his lovely wife and the three of us dined on Subway sandwiches with hot tea in the kitchen. We chatted about his career and mine, and the fact that he is retired and I am not. We eventually went to the basement lab where all the toys are hidden. The “Create Life” experiment is a real thing, by the way.

Rather than try to describe what I saw, I will share a few photos and videos from the visit. The captions provide some context.

I very much enjoyed my visit with Bob. We do have many things in common, and those interests are not common in combination, and in fact would be considered odd or weird by most people. Admittedly, his interest in pinball is based on his one creation, while my interests are centered on pinball as my medium. We promised to stay in touch and to collaborate in the future. I’m still trying to figure out what that might look like. 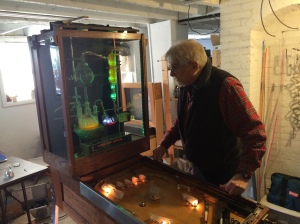 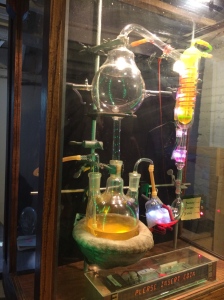 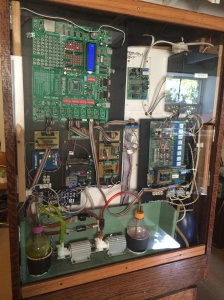 The Backglass of the “Create Life” Pinball Machine.