A blog is only as good as the story it tells, and my story for the past few months is that I’ve been holed up in my basement a lot, trying to see how many safety violations I can rack up while rushing to finish my latest project.

Since OSHA hasn’t been in touch, I think I’m in the clear now- no major loss of digits, air quality is good enough to keep a canary alive, and I’m not telling about any tripping incidents.

I won’t count the numerous soldering gun events either, since I’m rationalizing that those are almost like what people pay for at tattoo shops (just without the ink or artistic intent).

All of this was in preparation for what I’ll call the “big boy show and tell”- the World Maker Faire held annually on the site of the 1966 Worlds Fair in New York.

The stories from this past weekend were many and varied- I connected with dozens (if not hundreds) of potential clients who were envious enough, nostalgic enough, and “seriously considering” partnering with me to build them a custom pinball machine in a theme of their liking. But the most enjoyable conversations had nothing to do with that.

There was the guy who shared his story of how he longed to be a “creative engineer” (a textbook oxymoron if ever there was one), and how he started his life adventure dissembling and then repairing TVs at the age of 5. He now does movie production work. He was eager to talk about the social messages of the zombie movie, George Romero as a genius director, and asked “why did you choose to keep all the old electronics in your game design?”

Then there was the college grad student who picked my brain about getting new micro controllers to work with all the “electronic noise” of an old pinball machine. She seemed genuinely interested, and she even took notes.

There were dozens of baby boomers who I spoke to who simply loved the sights and sounds (and the physicality) of an old pinball machine- and they played to relive their youth, and to refresh their flipper skills. The “BB of the H” (Baby Boomer of the Hour) and I chuckled together as we watched kids from 2 to 22 walk up to the machine wide-eyed, but not having a clue how to play such a thing without a joystick or controller.

There were the casual inquiries from others who mentioned that they had never seen this model of machine back in the day when they were players. It was always fun to tell them that this was the one and only machine of this type- and even though it looks and sounds like a 1970’s era pinball, those machines didn’t have enclosed fog generating systems or “infinity mirror” portals. “You made this?” was my favorite phase of the day ( but also made me realize I wasted a lot of time and money on signage that tried to make that as pretty much the point of the project.)

There were engineers, artists, scientists, inventors, small kick-starter funded company presidents asking me technical details about my Arduino control system architecture. Some seemed dissatisfied with my choices, but were more forgiving when I admitted that I bought a “Getting Started with Arduino” kit exactly 1 year ago at this very Maker Faire. That same story gave comfort to a few wannabe inventors who were intimidated by the entire concept of Arduinos and programmable micro controllers. If a Civil Engineer (the opposite of an Electrical Engineer, if there is such a thing) can do this- you can as well.

And then there were the zombie and horror movie enthusiasts who shared how NOTLD “affected” them with its bleak ending and ground- breaking visuals.

These were the many languages spoken at Maker Faire- and I was happy to participate in such a wide range of discussions in all of those languages.

But I also must admit that I’m a bit sleepy now. Until next time…. 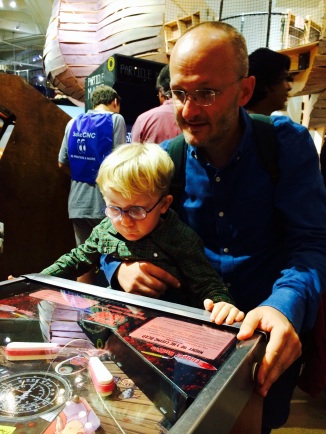 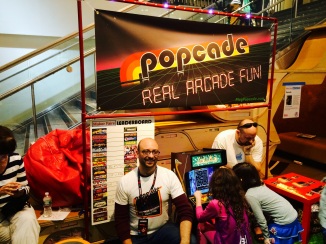