NOTE: This machine is not for sale! It was originally created for educational purposes in partnership with Roger Williams University’s Engineering Program, and was exhibited in several Maker Faires.

It remain so my personal favorite – Tenth Avenue Freeze-Out – The Springsteen song (basically) about the formation of the E-Street Band. The “donor” machine for this project was a pretty dreadful design in my opinion. I had no second thoughts about stripping this machine down to the bare wood for a custom job.

The original machine was a Williams Suspense model from 1969. The most interesting thing about the original game was that it had a little roulette wheel on the playfield that spun when the ball activated a “Spin” switch. A small metal ball in the wheel determines the number of points received, and there are high scoring “bonus” and “double bonus” slots on the wheel too.

My idea was to use this wheel as the center piece for the design, and came up with the concept of a turntable playing a 45 record of the machine’s theme song. That concept evolved into a design that involved providing bright under-lighting when the “Spin” switch was activated.

Another major refinement to the original design was the addition of blue spotlights on the top (to match the blue spot light theme on the back glass and cabinet) that light up when a “Special”/”Free Game” is achieved.

Finally, I spent a lot of time (too much time!) adding in a sound system and designing a “Jukebox” function that is controlled by 2 big red buttons on the front of the machine. The buttons essentially provide a retro version of a “shuffle” function to cycle through the catalog of Springsteen songs. If this function is turned off, then song snippets are triggered by various game functions.

The playfield design is littered with Easter Eggs paying homage to the Boss, the band, and the song from this era -circa 1975.

A 45 Record sits on the turntable, waiting for a ball to hit a “SPIN” hole.

The turntable lit up over the original roulette wheel 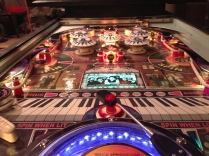 Looking up field at all the pretty lights and artwork inspired by “The Boss” in his early years.

The green “Jukebox” light is illuminated when the jukebox feature is turned on.

Circa 1975 Band on the Pop Bumpers

Under play field- after design additions