The last few months have been frantic. Work duties during the week, and weekends spent “cramming for finals” with my Engineering Senior Design Team at Roger Williams University.

Well the finals are done, the Team has graduated and moved on, and I have been teaching myself new programming languages so I can build a custom fog/light/sound/special FX control unit for my machine.

As of today, the machine is symbolic of its own state- a zombie mechanism capable of limited movement and grunting- but lacking a connected “brain” to make it all work correctly as envisioned.

So to the world of breadboards, Arduinos, LEDs and servos I have journeyed.

I emerge from the other side of this jungle jumble of thought wires with clarity- it almost all makes sense now. I have a complex web of my lessons connected, buzzing, glowing, and moving on my actual (not virtual) desktop. The design all works now- lights flash multiple colors, moans and screams happen electronically as I direct them to- as opposed to haunting my dreams. Fog generators glow when expected as I touch trigger wires.

I now must transform this rats nest of success into the limited space of my zombie machine to make it come alive.

I now look forward to days of soldering and cursing my iron scorched fingers.

The sprint is now to get it all together and functioning in time for the planned “big reveal” in New York City- at the World Maker Faire in September- if they accept my application. If so, my work gets an audience of 100,000+ people.

As part of my application, last night I put together a crude video of the transformation of this custom machine. The story, as is the machine, remains unfinished- a stumbling, bumbling zombie still searching for brains.

The video so far can be seen here: 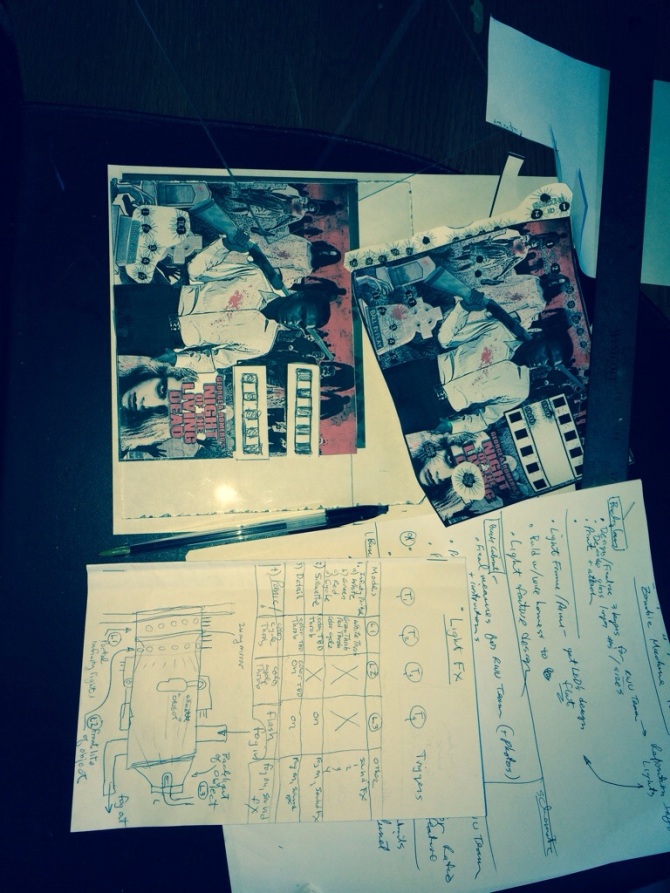